In 1998, ten years after Gyumri had been almost completely leveled by a devastating earthquake, the first biennial for contemporary art in the region was established in this former Transcaucasian capital. Organized by artists, the biennial in Gyumri presents divergent positions on the international, diasporic and local arts scenes and has become an important factor for integration and information in the Caucasus.
The exhibition “PARALLEL HISTORIES - Transition, Trauma and Collective Amnesia”, curated by Hedwig Saxenhuber and Georg Schöllhammer takes up the parameters of a local situation that still remains fraught with difficulties today. Gyumri is situated only five kilometers from the closed NATO boarder with Turkey, in the shadow of the capital city of Yerevan in a highly charged geopolitical region – and is trying to find space for a comparative artistic debate on a condition described by the artistic director of the biennial, Azat Sargsyan, as “post-Soviet, post-catastrophic, post-industrial, post-totalitarian. Gyumri is the mirror cracked from transformations of history into which many of us don’t want to look ...”

The participating artists use in many cases very specific strategies to formulate their commentaries on the transformation process – for the most part through works created on-site in Gyumri or adapted to reflect the Armenian situation. Luchezar Boyadjiev, for example, weaves together the close studies he has made through the lens of his digital camera into a web of impressions of cities in the process of transformation. The way he incorporates Gyumri into these observations lends the urban landscape of the second largest Armenian city a striking specificity, with the rubble left behind by the earthquake reflected in the shiny facades of the newly erected buildings.
Andreas Fogarasi’s work revolves around the question of how local identities are represented. He has created a large-scale sculpture for Gyumri that refers specifically to a building in the city center, but also to similar examples of sculptural, graphically incisive architecture – the “Bird’s Nest” Olympic Stadium in Peking, or the Citroen showroom on Paris’ Champs-Élysées. The dominant facade of the local electrical appliance store on Gyumri’s main square is abstracted into a fragment of a fence, both flexible and obstructing.
The 16mm film “48 Heads from the Mercurov Museum” by Anna Artaker shows views of a collection of death masks by the Armenian-Soviet sculptor Sergey Mercurov that is stored in the house where he was born in Gyumri. In a structure echoing Kurt Kren’s film “48 Heads from the Szondi Test” from 1960, in which Kren filmed newspaper photos of the faces of sadists and criminals, the masks are displayed in rapid sequence. Artaker’s film manages both to illustrate a chapter in Soviet history-writing – the masks all being casts of Soviet politicians, revolutionaries or artists – as well as to bring to the fore what normally remains unseen in such masks.
Kamen Stojanov deals instead with the living residents of Gyumri, having created a film showing the physiognomies of the people at the daily market. For a brief moment, the fleetingness of which is accentuated by having the persons portrayed close their eyes and then open them again, the many figures making up the anonymous bustle of the Gyumri marketplace stand out as individual protagonists in the city’s daily life.

In Milica Tomić’s “Container,” which the Serbian artist has now adapted especially for the Gyumri Biennial, she refers back to a crime perpetrated by the Northern Alliance in Mazar-i-Sharif, Afghanistan, in 2001. 8,500 Taliban prisoners of war were locked in an airless container without food or water and carted off to prison on a journey that took several days. When they begged for air, the Northern Alliance troops shot at the container, “to make holes for air to come in.” The artist, who is interested in power structures and their visualization, has already exhibited this work in Belgrade, Sydney and England. In Gyumri, the container, set up in front of the National Aesthetic Center, will be re-dedicated. Although, following long-winded negotiations with the city authorities and the artistic directorship of the biennial, not one bullet hole perforates the container, it still stands for complex associations between the trauma of the destructive earthquake and social transformation in the post-Soviet 1990s. Containers were used after 1988 to house many Gyumri residents who had lost their homes to the earthquake, and are in some cases still in use today.

Through the participation of the artists’ collectives Société Réaliste from Paris, Little Warsaw from Budapest, R.E.P. Group from Kiev, Chto delat from Moscow/St. Petersburg, as well as Milica Tomic and her experiences working with the Monument Group in Belgrade, it was possible to explicitly represent at the biennial the various forms taken by collective artistic creativity, the protagonists of which share common programs, methodologies or political standpoints. The collective organization of artistic work can unleash a particularly high emancipatory potential, which can allow for a productive and performative critique of social institutions and policies. Especially in view of the difficult local situation with regard to contemporary art forms and their representation, artistic alliances of this kind harbor the kind of self-empowering force that could achieve positive effects here.

With international artworks and the involvement of artists’ collectives, “PARALLEL HISTORIES – Transition, Trauma and Collective Amnesia” delves deeply into local Armenian issues. The exhibition is the result of a collaboration over several months between the GCCA (Gyumri Center of Contemporary Arts), organizer of the biennial, and tranzit.at, with the aim of lastingly reinforcing and professionalizing the local infrastructure and the organization of the biennial by means of workshop series at the Art Academy in Gyumri and film screenings and lectures held at various city venues. 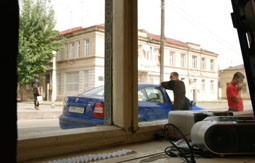