Visual Dispositif - Social Dispositif is part of the collaborative project Art/Knowledge/Politics which joins politically engaged artists, critical academics and activists at the platform of Visual Culture Research Center as a research institution of National University of Kyiv-Mohyla Academy. The project was launched in April 2010 at the conference under the same title, which studied visualizations of power relations in different social practices and their critical analysis in art and moving image.

The next part of the project includes an exhibition Court Experiment, which documents court prosecution of activists that takes place in Ukraine today. A series of public discussions, seminars and lectures will be held during the exhibition, addressing the questions of relation between art and politics and the strategies of critical artistic intervention in social and political processes in the context of the issues that are addressed by the exhibition Court Experiment as well as general questions of political art and experimental cinema. As part of research program of the Center an academic conference Cinematic dispositif: Moving image in Social Context will discuss the film as medium and social practice mobilizing critical methodology of Marxism, psychoanalysis, semiotics, semiology, phenomenology, feminism, and postcolonialism

Court Experiment is a statement against the court prosecutions of Ukrainian activists for the expression of disagreement with existing injustice, it is an action of solidarity with accused Yevgenia Belorusets, Andriy Movchan, Serhiy Movchan and Olexandr Wolodarsky, who’s trails are going on for years. The project started from the visits to the court sessions by people who wanted to express their support for the accused activists. Among them were activists, journalists, academics and artists.

Court Experiment is an attempt to attract a public attention both to these concrete cases of prosecution and generally to the judicial system, which, being built in the capitalist economy, is an instrument of violence and injustice. The second important goal of the exhibition is to reveal the real matters, against which the activists protested – the destructive expansion of capital in social sphere, the increasing of moral censorship as an authoritarian symptom – framing them in a wider context of political, cultural, and social circumstances inherent in post-Soviet society.

The exhibition consists of the author’s works and the documentation of the court processes, which is made collectively. Only documentary materials are presented at the opening, afterwards the space is gradually filled with artists’ individual works. The process of filling in the space is accompanied by the discussions, screenings, performances and seminars. Court Experiment is an installation-in-process, which by imitating cyclic unfolding of the trails against the activists, addresses the subjects of political actions within the field of articulation between art, knowledge, and politics. 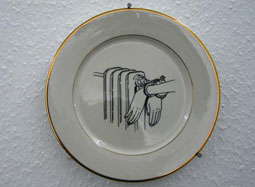