Ten international film and video makers, artists or groups of artists are invited to reflect on the process of film making in the form of a live event.

Followed by a discussion with the curators and artists of "Changer d‘image".

With the title "Changer d’image / To Alter the Image" a series of performative events will take place in April and the autumn of 2013 in the mumok kino on the occasion of the tenth anniversary of the tranzit initiative. Ten international film- and video makers, artists or artist groups are invited to reflect on the process of film making in the form of a live event. The programme consists of a double presentation on each of two evenings. On 26 April the Chto delat? (St. Petersburg) group will present their concept for a film which is seeking new forms of contemporary urban fables, re-reading La Fontaine in a post-Brechtian age. Video artist Ruti Sela (Tel Aviv) proposes a live intervention on stage, experimenting with different processes of moralizing movement, participation and uncontrolled engagement.

The series will continue in September and October 2013 with contributions by Fikret Atay, Johanna Billing, Igor and Ivan Buharov, Pavlína Fichta Čierna, Vít Klusák and Filip Remunda, The Bureau of Melodramatic Research + The Presidential Candidate, Wendelien van Oldenborgh We Should Have Never Left (Uganda): Rasha Salti and Sam Shalabi.

The event has been conceived by Vít Havránek (tranzit.cz), Dóra Hegyi
(tranzit.hu), Georg Schöllhammer (tranzit.at) and Raluca Voinea (tranzit.ro) for the tenth anniversary of the tranzit initiative. 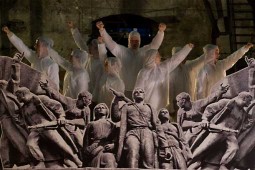