Almost 25 years after the corrosion of the Soviet Union, still little is known, beyond the former Empire’s borders, about the social fabric that wove it together. Architecture and urbanism have been one of its strongest warps: creating a feeling of social unity and being one of the agents of its dissolution. This continent of architecture, afflicted by inner contradictions that enfolded within an homogenized space, is full of masterpieces waiting to be formally discovered. Trespassing Modernities explores this landscape and an approach of building for a fundamentally different idea of society.

Trespassing Modernities is programmed for SALT by Georg Schöllhammer with Ruben Arevshatyan. The exhibition is based on the research of Local Modernities, a project by Georg Schöllhammer, Ruben Arevshatyan, Klaus Ronneberger, Markus Weisbeck and Heike Ander, which initiated the exhibition Soviet Modernism 1955–1991. Unknown Stories by Architekturzentrum Wien. 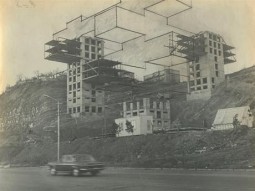