The Architekturzentrum Wien writes architectural (hi)stories: ‘Soviet Modernism 1955 – 1991. Unknown Stories’ explores, for the first time comprehensively, the architecture of the non-Russian Soviet republics completed between the late 1950s and the end of the USSR in 1991. The research and exhibition project shifts the Russian-dominated perspective and focuses attention on the architecture of Armenia, Azerbaijan, Belarus, Estonia, Georgia, Kazakhstan, Krygyzstan, Latvia, Lithuania, Moldova, Tajikistan, Turkmenistan The Ukraine and Uzbekistan.

While Constructivism and Stalinist architecture have largely been included in Western architecture history, the Soviet modern architecture of the second half of the 20th century has remained practically unknown to date. Working in close collaboration with local experts and architects, a research group at the Architekturzentrum Wien has pursued the specialities in the architecture of the period and its ‘stories’. In the course of this extensive project a network has been created between a large number of researchers from the East and the West and interviews conducted with eyewitnesses of the time. Their stories have hardly been documented in writing and their works have not yet been viewed in context. Time is running out, and action is urgently needed as many of the buildings, which are still waiting for appraisal by architectural historians, are threatened. The poor construction techniques used at the time they were built means that these buildings are aging rapidly and there is a widespread lack of resources available, or support, for their upkeep.

Far from all the clichés of monotonous looking Soviet architecture, the exhibition and the catalogue draw attention to regional architectural specialities completed in the period between the ‘Khrushchev Thaw’ and ‘Perestroika’, showing impressive architecture that challenges the writing of the history of postwar Modernism dominated by the West.

The exhibition shows the large diversity of local strategies, configurations and norms within the former Soviet Union, and contradicts the western prejudice that Eastern Bloc architecture is monotonous looking because of apparently having been produced under similar conditions and having had to conform to the
same standards in a closed political system.

Exhibition curators: Katharina Ritter, Ekaterina Shapiro-Obermair, Alexandra Wachter The exhibition project is based on an initiative by Georg Schöllhammer and the association ‘Local Modernities’. 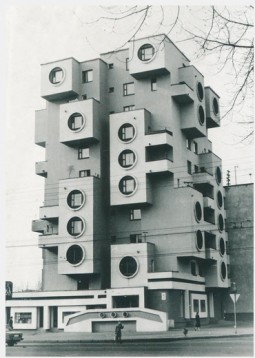