Changer d’image / To Alter the Image is a series of performative events at mumok kino (mumok cinema) started in April and to be continued in September and October 2013. Ten international filmmakers, artists or artist groups have been invited to reflect on the process of filmmaking in the form of a live event.

Changer d’image takes up the title of a short film by Jean-Luc Godard. Godard was commissioned to make a film on the subject of political change in French politics up to it when, in 1981, the left (Francois Mitterrand) won the presidential elections. His film is a personally performed textual reflection in front of an empty screen. Later it is animated with a chain of images that ”resist change“. It is a personal statement of the capacity or incapacity of changing images to reflect the factual political change he was fighting for.

The commission is approached in the way the tranzit network usually works: "I receive and I give - such is human life. Each directs and is directed in his turn. Therefore there is no fixed and constant authority, but a continual exchange of mutual, temporary, and, above all, voluntary authority and subordination." (Michail Bakhunin, God and the State, Chapter 2, 1871).


Changer d’image is a project by tranzit and ERSTE Foundation on the occasion of the tenth anniversary of the tranzit.org initiative.

The live events will be held in English.

25. 09. 2013, 7 pm
Live event with Fikret Atay and The Bureau of Melodramatic Research & The Presidential Candidate
Presented by Raluca Voinea (tranzit.ro)

26. 09. – 02.10. 2013
Film screenings by Fikret Atay, The Bureau of Melodramatic Research and The Presidential Candidate

23. 10. 2013, 7 pm
Live event with WE SHOULD HAVE NEVER LEFT (UGANDA) COLLECTIVE and Ivan Moudov
Presented by Dóra Hegyi (tranzit.hu) 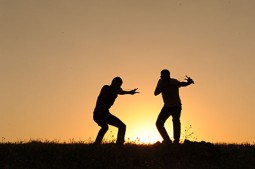 Fikret Atay, from: Saints of the City, 2012, Courtesy of the artist and Chantal Crousel Gallery