Artist Talk - Art in a State of Crisis

Nikita Kadan in conversation with Erich Klein and Hedwig Saxenhuber.

Nikita Kadan created In the framework of “The School of Kyiv” - Kyiv Biennial 2015 an installation (“The possessed can testify in court”, 2015), which is a construction of archival shelves uniting the objects from the Historical Museum collection with the works of the artist. The pieces from the collection reference the Soviet history of the current conflict zones: Crimea and Donbass regions. These objects, once infested with state ideology, have now escaped from any ideological narration. The objects have lost their fixed positions and conventional characteristics of ‘friend’ or ‘enemy’, and they start to produce doubts regarding any type of historical narration. What is the crisis of art in Ukraine? The panelists will reflect on the questions of contemporary art in a political geography.

The discussion is held in English.
Free entrance

Nikita Kadan works include paintings, graphics, and installation, often in interdisciplinary collaboration with architects, sociologists and human rights activists. His practice consists of a critical investigation into the experience of present-day Ukrainians and their relationship to their Soviet past. He is a member of the artist group REP (Revolutionary Experimental Space) and founding member of Hudrada (Artistic Committee), a curatorial and activist collective. He lives in Kyiv.
Nikita Kadan is currently participating in the residency at Q21, Vienna.

Erich Klein is a journalist, translator and board member of tranzit.at. He is editor of the literary magazines “Wespennest”, “Europa erlesen: Moskau” (1998), “Europa erlesen: St. Petersburg” (1999) and contributes constantly to the Ö1 programs "Diagonal”, “Ex libris" and “Kontext”. He is organizing literature events such as “Literatur im Herbst” at Alte-Schmiede Kunstverein Wien.

Hedwig Saxenhuber is an editor, writer and curator based in Vienna. In 2015 she was the curator of “The School of Kyiv” - Kyiv Biennial 2015 together with Georg Schöllhammer. She is co-editor of the arts periodical “springerin Hefte für Gegenwartskunst” and founding artistic director with Christian Kravagna of Kunstraum Lakeside in Klagenfurt. She was also co-artistic director of VIENNAFAIR 2011.

In cooperation with tranzit.at and Academy of Fine Arts Vienna.
ERSTE Foundation is main partner of tranzit. 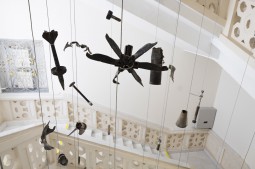