The Empire Strikes Back?

A traveling academy will explore the post-Soviet cityscape (in Chisinău, Kiev, Minsk, Moscow, Tbilisi and Yerevan)

Unless the countries of the so-called post-Soviet area confront their common Soviet heritage with its colonial and geographic structures and emancipatory beginnings, there can be no reconciliation in the region. At the heart of the project "The Empire Strikes Back?" is therefore a theme that still both unites and divides cities and memories in the region: namely, the handling of the architectural legacy of the Soviet Union and the treatment of the enlightened democratic urban (sub-) cultures and civil society stakeholders over the last three decades.The structural similarities concealed behind descriptive categories such as "post-Soviet society" will be investigated based on the example of specific urban situations in order to expose their unique local features. Out of a common past in the "Empire" and the separate yet shared experience of the post-Soviet city, models are to be developed for a joint future.
The post-imperial disintegration of the Soviet Union will be regarded in this project not only in a negative light but instead as a still-ongoing historical process that can help us to better understand many of the current conflicts and social tensions in the countries involved. The de-Sovietization law in Ukraine, which has as its goal the elimination of all symbols of Soviet power in the public realm in the eastern Ukraine, can serve here as a conflict-fraught example. It cuts off the possibility for a large portion of the Eastern Ukrainian population to come to terms with their own history, because it’s implemented without engaging with cultures of remembrance or to identify with the collective memory. It only exacerbates the conflict. In Russia, a wistfully tinged nostalgia for Soviet days is taking root in particular among the younger generation, the same mood that is expressed in the neo-imperial projects of the current regime.

These levers will be used to initiate a culture of dialogue and debate, of the mediation of values and the differentiated treatment of shared history – via the transmission medium of the urban fabric and incorporating a wide range of stakeholders: social activists and museums, entrepreneurs and critical urbanists, artists and filmmakers, authors and historians.

"The Empire Strikes Back?" pursues the question of to what extent urban life and the geographical, social, cultural-institutional and administrative structures that today shape the project region can be seen as a national or colonial legacy and what standing they occupy in the respective republics. In addition, the project examines the experience of migration. How are people treating the urban space in the face of current demographic and social changes and the prevailing economic paradigms? How can sustainable long-term cooperation in this field be instituted? What personal memories can be productively integrated into the democratic process and used to forge new symbols?

The project will take the form of a traveling academy, while a group of international civil-society stakeholders and experts will open up opportunities for a peaceful, cooperative and democratic future and contribute to the development of concrete partnership projects. This traveling academy accompanies an exhibition and a publication.

Project concept prepared by Georg Schöllhammer, Hedwig Saxenhuber and Michaela Geboltsberger
"The Empire Strikes Back?" is a project by Goethe-Institut and the association Schwarzes Quadrat. 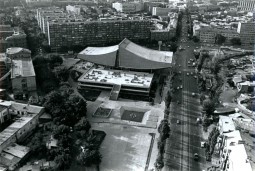