Lecture: Georg Schöllhammer and Wolfgang Kil - The Empire Strikes back? Three modernities of the Soviet Union after 1960 and their presence

The history of the rise and fall of the Soviet Union after Stalin's death can be told in many different ways.
To look at it through the mirror of the Soviet city, through architecture, urbanism and the concepts and ideas, behind it, is one of the most fascinating. The lecture will focus on the dynamics between the colonial, national and internationalist concepts that inspired the architecture of Soviet post-war modernity, the complex relationships between central planning and autonomous tendencies in the peripheries, as well as the difficult afterlifes of the structures and masterpieces of this period in the present.

In the framework of the project The Empire Strikes Back? A traveling academy will explore the post-Soviet cityscape (in Chisinău, Kiev, Minsk, Moscow, Tbilisi and Yerevan)

Georg Schöllhammer is editor, author and curator in Vienna, and head of tranzit.at
Wolfgang Kil is an architectural critic and publicist in Berlin 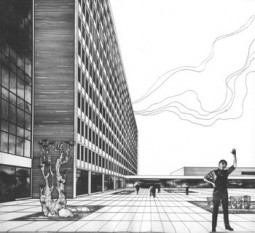