(No) News from Belarus

“No News from Belarus” is the name of the work by the Belarusian artist Alexander Komarov that was presented at the Contemporary Art Centre in Vilnius in 2010. The title alludes to so-called “Belarusian stability,” which is maintained by the authoritarian regime in lieu of any promise of political or social change.

But change happens nevertheless – and in spite of the way the political opposition in Belarus has been totally crushed over the last seven years – because the state cannot control what is happening in society and on the cultural scene. Olga Shparaga speaks in her lecture about the new discourses that have resulted, and the space they offer for contemplating the political and social situation in Belarus and for resistance. An important term addressed in this analysis is “humiliation.” This humiliation takes very different forms in today’s Belarus, ranging from the many ordinary everyday and institutional insults to police violence. During the last major protests in March 2017, anonymous Belarusian graffiti artists shone an unsparing light on the activities of the Belarusian police, comparing their methods to corresponding practices in the Stalinist era, as Olga Shparaga’s presentation will show. One artist even went so far as to depict those responsible for police brutality in Belarus in Soviet uniform. This work is subtitled: “That’s me, Interior Minister Igor Shunevich, who is proud of the uniform and methods of the NKVD*.” Such graffiti are executed in Minsk in the course of just a few hours. The artist Oleg Larichev collects photos of them on his Facebook page and oversees the graffiti project “Urban Myths.” For this engagement he was attacked by civilian policemen and sentenced to five days in prison.

Olga Shparaga wonders whether a critical examination of the art scene in Belarus might serve to draw attention to the current situation in the country. She notes that resistance is rising not only in Belarus but also on the wings of the feminist, environmental, urban, and other emancipatory movements and initiatives that are currently active all over Europe and the USA. She furthermore inquires into the significance of these movements and whether, without them, any resistance is still being put up at all against the increasingly right-leaning political landscape.
Olga Shparaga’s talk examines the unique qualities of the Belarusian initiatives and their potentially universal dimension. In the process, she will highlight in particular the role of informal education, based mainly on the example of the project ECLAB (European College for Liberal Arts Minsk), in which she is herself involved.

*NKVD: People’s Commissariat for Internal Affairs of the USSR was the leading Soviet secret police organization

The lecture will be held in German.

Olga Shparaga studied Philosophy in Belarus and Germany. She curated the concentration “Contemporary Society, Ethics and Politics" at the European College of Liberal Arts, Minsk (Belarus) and teaches courses on a broad variety of philosophical themes. She also served as Co-editor of the Internet-magazine «Novaja Eŭropa» («New Europe») (www.n-europe.eu, 2006-2014). Shparaga is member of the Editorial Board of the Ideology and Politics Journal (ideopol.org) and of the Belarusian Journal for the Contemporary art pARTisan, member of the Scientific Board of the International Philosophical Book Series Libri Nigri. She was a Research Fellow at several universities, among others, the Ruhr-University Bochum, the Centre for Theoretical Study (CTS) in Prague and the "New School of New York".
She has published numerous articles and the monograph Wake of Political Life: An Essay on the Philosophy of the Public (Vilnius: EHU, 2010, in Russian) and edited seven academic volumes.

Olga Shparaga participated 2016 in the project by tranzit.at The Empire Strikes Back? A traveling academy explored the post-Soviet cityscape (in Chisinău, Kiev, Minsk, Moscow, Tbilisi and Yerevan)

Image and title: Alexander Komarov
No news from Belarus, 2010 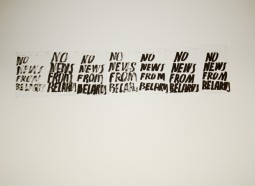