Red Thread
The project Red Thread is envisioned as an active network and platform for exchange of knowledge and collaboration of artists, curators, social scientists, theorists and cultural operators from the Balkans, the Middle East, the Caucasus, North Africa, and beyond. It aims to create and widely disseminate new knowledge about paradigmatic socially engaged art practices in a wide geopolitical context, thus challenging the predominance of Western narratives in official art histories and exhibition making. Through initiating research, meetings, panel discussions and an active online site for exploring both historical and contemporary approaches that deepen and challenge broader relations of art and society, Red Thread intends to reopen the issues of joint modernist legacies and histories between various so-called "marginal" regions, and attempts to create new approaches to deal with questions of auto-histories, self-positioning and reinterpretation of art history.

Red Thread is supported by tranzit.at

Dispossessions, Solidarities, De-integrations
The fourth issue of Red Thread edited by Erden Kosova, Zeyno Pekünlü, Vladimir Jerić Vlidi, Jelena Vesić and Banu Karaca concentrates on the concept of "dispossession". The issue also includes a special section on "de-integration" compiled in collaboration with The Gorki Theater and 3. Berliner Herbstsalon. Texts in this issue are written by:


Excerpt from the editorial text:
"For the occasion of this issue we focused on the notion of dispossession, suggested by a member of our editorial board, Meltem Ahıska. It was right around the time when Judith Butler and Athena Athanassiou had jointly published Dispossession: The Performative in the Political (2013), and we were excited by the possibility of expanding the notion to include the examination of body, identity, rights, and freedom within the framework of dispossession; this issue is made up of responses to this expanded framework.
...
In the previous issues of Red Thread we tried to stay within the circle drawn with the center point in the Eastern Mediterranean basin: the focus was conceived to be more on the non-Western geographies of Southeast Europe, Southern Caucasia, the Middle-East, Northern Africa. The traumatic developments of the last few years and the consequent demographic movements kept us from clearly distinguishing between the geographies we focused on and Europe understood as European Union. In this issue, we trace the official responses of EU countries on the migration wave, as well as the rise of the populist right. Through our collaboration with Maxim Gorki Theater and 3rd Berliner Herbstsalon, we feature texts on the historical infrastructure which provocatively foreground "de-integration" in the face of the "integration" narrative that has taken over the entire political scale. We hope that you can find striking examples that minor against the majoritarian positions can relate to." 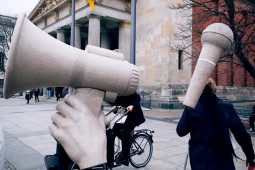