The basement rooms on Vienna’s Guntherstrasse, which formerly housed a bakery, located nearby the allotment gardens on the former Schmelz parade grounds and their »Shelter of the Future«, are the scene of a drama played out in pictures, sculptures, a diverse array of perceptual apparatus, objects, furniture, carpets, and stones, as well as other found items, and whose main characters include Nothing, the Infinity of the Hole, the Circle, and He Who Swears Eternal Allegiance to His Center. Bodies enclosed within themselves, spied in mirrors, which do nothing but turn toward each other and gaze into their own inner emptiness.
He has lived here almost his entire life, two floors up, in an apartment the electrical engineer, who then trained with Ernst Plischke at Vienna’s academy on Schillerplatz as an architect, sculptor, illustrator, and wordsmith.
This apartment is the coffer in which Heinz Frank contemplates the sleep of reason. It is tailored to his body like a suit and conducive to his wish to withdraw into his innermost self. This book captures a moment of this scenery—through the eyes of the photographer Wolfgang Thaler. And it fixes down in a certain image location the objects that have materialized from traces of a meditation on the body and the inability of many languages to describe this meditation.
(Georg Schöllhammer)

The discussion will be held in German. 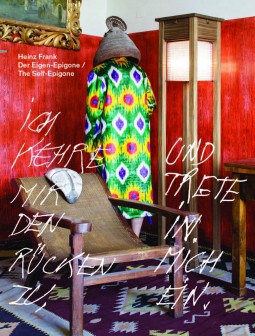