“The City of Tomorrow” considers the life and afterlife of the Soviet city and its fate after the Soviet project came to an end. The Soviet urban system that was planned and built as a model for an altogether new society is presented as thematic stations each of which is dedicated to a certain aspect of the Soviet urban fabric. Juxtaposed to the architectural projects exhibited in the central section, the works of the paper architects of Novosibirsk take up an important place in the general structure of the display and demonstrate the postmodernist trends in the architectural thought as a reaction to the contradictions of the Soviet modernism.

“The City of Tomorrow” focuses on the social and ideological fabric that once wove the Soviet Union together. Architecture and urbanism have been among its most effective agents: engendering a sense of societal unity across the USSR and later acting as catalysts of its dissolution. This exhibition presents the evolution of Soviet modernist architectural heritage from its genesis in the 1920s and its revival in the late 1950s through to its end simultaneous with the collapse of the Soviet Union andwith the gradual demise of the patrimony that partially survived in the former republics of the Soviet empire today.

Sometimes as a decaying ruin, other times as an adaptive re-use project, this legacy — with its own masters, local dialects, and unsung masterpieces — tells a story that was afflicted by inner contradictions and idiosyncrasies as much as it was developed within a seemingly homogenized space. “The City of Tomorrow” explores the ideological and cultural landscapes and its expansive reshaping at the hands of architecture and urbanism which sought to build a society fundamentally different to the neoliberal order many Soviet successor states experience today.

A new section, especially developed for the Novosibirsk edition of “The City of Tomorrow”, is dedicated to the architectural processes in Siberia throughout the XX century. From the earliest modernist prerequisites in literature, the poetry of Alexei Gastev, through the formation of regional architectural school based on the educational programs of VKHUTEMAS and up to the Siberian Soviet modernism of the second wave and the Novosibirsk paper architecture of the 1980s.


“The City of Tomorrow” is an exhibition of Goethe Institute Eastern Europe and Central Asia in cooperation with tranzit.at 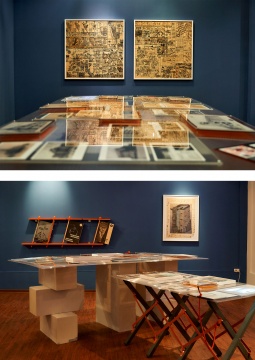