Soviet Modernism, the curatorial hypothesis of a siberian modernism, the role of paper architecture and questions of heritage protection

The exhibition “The City of Tomorrow” which is currently on display at the municipal art centre CC19 is based on idea of local modernities. Most often, these local versions of Soviet Modernism are linked to ethnic or national identities, as architecture was used to define and represent the particular nature of the Soviet Union’s individual republics. It was a tool of asserting cultural and to some extent also political autonomy, a vehicle of nation building.

Where does that leave Siberia, which has never had an independent status? The exhibition proposes the term “Siberian Modernism”, asking if Siberia, too, has had a local modernity or at least has its own history of modernism. Siberian modernism may not be defined by the assertion of a national, ethnic or even regional identity by local political elites. Also, the lack of financial resources often dictated more modest and simple constructions than at the imperial centre. However, Siberia has its own architectural schools, a range of overlooked masterpieces and a distinct history of modernization. Much more than the old European capitals, Siberian cities are products of modernism. As the name Novosibirsk suggests, modernity – rather than ethnicity or nationality – was itself considered the defining trait of the city. Perhaps, in this sense we can speak of a Siberian Modernism.

Novosibirsk also has a strong tradition of paper architecture that speaks to Siberia’s subaltern status within Russia while also telling a story about how intertwined architecture and arts have been here. Paper architecture can be considered the missing link between the grand history of Siberian modernization in the 20th century and its free-spirited countercultures. Through a prominent figure like Slava Mizin one can draw a direct line from the marginalized young architects of the eighties, to the self-assertive ironic conceptualism of the nineties and naughties till today’s increasingly international contemporary art scene, as represented at CC19. Meanwhile, another former paper architect, Alexander Lozhkin, has become Novosibirsk’s chief city planner.

Nevertheless, modernism remains controversial till today, making heritage protection a difficult endeavour – both with regard to architecture and paper architecture. Large parts of the public, let alone the private sector, have little appreciation for the architectural visions of the past. Indeed, many buildings are in bad shape, ruined by time or distorted by changes. Moreover, modernism is often framed as western degeneration, despite the modernist foundation and history of many Russian and in particular Siberian cities. What ought we do with the remnants of modernisms – be it Soviet or Siberian? Should they be protected and if so, how?

In this panel discussion, the curators of the exhibition “The City of Tomorrow”, Georg Schöllhammer (Vienna), Ruben Arevshatyan (Yerevan), and Anton Karmanov (Novosibirsk), discuss with the Novosibirsk based experts Alexander Lozhkin and Slava Mizin the value of Soviet Modernism, the curatorial hypothesis of a siberian modernism, the role of paper architecture and questions of heritage protection. The digital event is moderated by the director of the Goethe-Institut Novosibirsk, Per Brandt.

The online discussion will be broadcasted live on Youtube-Cannel of the Goethe-Institut Russia on Monday the 8th of February 2021 at 18:00 pm (12:00 CET).

The discussion will be held in Russian, but an English translation will follow.

This panel discussion is a Goethe-Institute event from the East Europe/Central Asia region in cooperation with tranzit.at and supported by ERSTE Foundation. 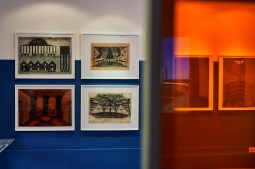 Related
The City of Tomorrow