Exhibition: Things we sense about each other

In cooperation with the Badischer Kunstverein from Karlsruhe and tranzit, eight co-curators from Baku, Bucharest, Kiev, Krasnodar, Minsk, Prague, Sarajevo and Yerevan were invited to realize the exhibition and enter into a long-term dialogue as a trans-European network.

The exhibition showcases artistic works that critically address divergent perspectives of an emancipatory and democratically conceived Europe, something that is being called into question along the margins (but also at the center) to an increasing degree. The artists explore the significance of objects or things which – depending on who interprets them, who claims them, and who resists their putative meanings – are the bearers of divergent and often antagonistic attributions of identity. With the rhetoric of inclusion and exclusion – in conjunction with the displacements and distortions of ecologies and economies, an increasingly nationalist politics of identity, technological upheaval, and the massive transformation of the shared lifeworld – threatening to tear European societies apart, objects often serve as substitutes for fundamental assumptions about the “Other.”

Integrated into the exhibition alongside the art projects will be a number of such conflictual objects themselves, which symbolize diverse ideas and visions of Europe from various political, cultural, and social perspectives. Whether everyday objects, political symbols, texts, or cryptograms, these semantically charged things act as antagonistic but also mediating and conciliatory artifacts in a dialogue between a multiplicity of European societal and cultural constellations. In many instances, they confront us as shapeshifters that are detached from any single horizon of negotiation, but whose significance evolve perpetually. The participating artists expose the problematical status of these things to full view, at the same time investigating the transformative potential of a history that is embodied in objects. What allows a specific object to function as a representation of a specific cultural complex, and: What does its materiality reveal? How and to what degree do discourse about and classifications of this materiality color our perceptions?

Planned as the project’s 2nd chapter, and to be launched in June of 2021, is a travelling academy, conceived as a nonhierarchical research group, to be based temporarily in Karlsruhe, and located subsequently in the different countries associated with the project. Both exhibition and academy are conceived as a democratic platform designed to join local and international networks with one another in dialogue, to initiate long-term communities, and to explore possible forms of a transnational European society.

A graphic novel and a special issue of the magazine springerin will accompany the exhibition.

A project by tranzit.at and Badischer Kunstverein.

Things we sense about each other is part of the 25thEuropean Culture Days 2021 in Karlsruhe.

The opening of the exhibition will be streamed on Thursday, 6.5.2021 at 7 pm on the YouTube channel of Badischer Kunstverein. 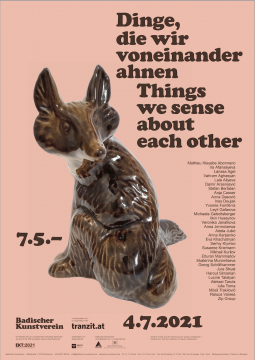