The Capital of Desires

Pavilion of Republic of Armenia at the 14th International Architecture Exhibition, Venice

Armenian history of the last two centuries was tightly interconnected with the project of (re)-building a nation. Architects and urban planners played a central role in this project. Their built and un-built visions have been driving the collective imagination and the associated aesthetic, social and political desires ever since. The shape of Armenia’s capital, Yerevan, provides the spatial master narrative for reading the tensions and contradictions that derived from the dreams of a new Armenia. It tells a unique story, almost without comparison in the 20th century: the story of three conflicting national Modernisms. It is as if the wish for a new self-defined social order and reality had to cope with the hidden and unfulfilled promises of an architectural imaginary, expressed by conflicting formal languages. Thus, and not only for architects, Yerevan is: The Capital of Desires

Representative of the Commissioner:
Vartan Karapetian

In cooperation with tranzit.at / Sweet Sixties 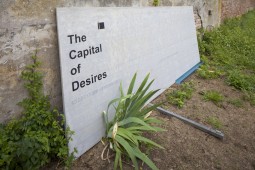