All started in the thaw period of the Khrushchev years after Stalin’s death in 1953. The new ideological call for modernization of the country led to an enormous extension of urban space. This continued into the final years of the USSR as economical crisis and dwindling material resources took their toll. The master architecture of Socialist Realism was rejected. A new urbanization was driven by an ideology of scientific and technological progress. It was conceived by local planning offices in each republic and executed to the standardizations of the construction industry. Architects experimented with concepts of international architecture and the legacy of Soviet Modernism of the 1920s. Rapidly an original Soviet language of Late Modernism developed.

But already in the 1960s a critical countermove to this policy of industrialization of space and architecture arose. It took the historical old town as a point of reference. Architects and local elites understood their distance to the official canon of architecture as being a confirmation of their regional – or national – search for identity. Thus an architectural avant-garde, that defied the dominant politics of the central Moscow bureaucracy, was able to form in the republics. Both versions of modernism – the local modern and the Soviet-hybrid – reflected differently positioned modern lifestyles.

Almost 25 years after the corrosion of the Soviet Union, still little is known, beyond the former Empire’s borders, about the social fabric that wove it together. Architecture and urbanism have been one of its strongest warps: creating a feeling of social unity and being one of the agents of its dissolution. This continent of architecture, afflicted by inner contradictions that enfolded within an homogenized space, is full of masterpieces waiting to be formally discovered. A Parallel Modernity explores this landscape and an approach of building for a fundamentally different idea of society.

“A Parallel Modernity. Soviet Architecture 1956-1991” is dedicated to the legacy of post-war Soviet architecture: to its masters and its specificities, its original styles and erratic buildings. It aims to offer a glance at a still existing void in the canonical history of architecture.

Show runs
Sept. 5 - Dec. 21, 2014
At Flávio de Carvalho Floor
Tuesday to Friday from 10am to 8pm
Saturday, Sunday and holidays from 10am to 6pm
Closed on Monday


"A Parallel Modernity"
is curated by Georg Schöllhammer, Vienna and Ruben Arevshatyan, Yerevan, and designed by Asli and Can Altay for Future Anectodes, Istanbul.

The exhibition is a tranzit.at and Sweet Sixties project

The show has been initiated and produced by SALT, Turkey, in 2013 under the title "Trespassing Modernities", Producer: Meriç Öner 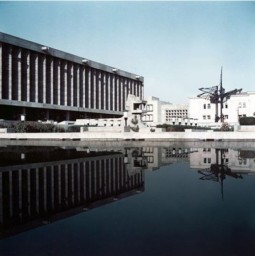