tranzit's book series and publication programme is developed in conjunction with activities initiated and carried out by tranzit and reflects the polycentric structure and autonomy of the association in the various countries. The publication programme focuses on the geographic space of Central and former Eastern Europe, emphasising the revolutionary transformation in art practicesthat occured in the 1960s and 1970s.

The folder gives an overview on the books published in the series artist's books, the recent histories series and the navigation series between 2003 and 2011 and is available at each local tranzit association. 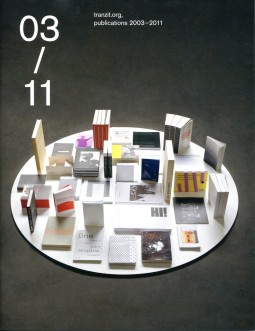